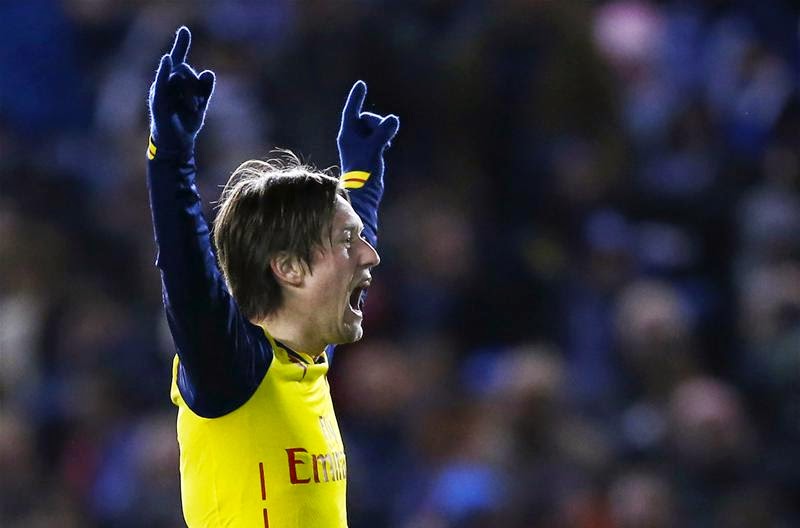 Arsenal boss Arsene Wenger praised Tomas Rosicky for his performance against Brighton & Hove Albion in the FA Cup describing him as the ideal player “if you love football.”

Rosicky, 34, started in midfield alongside Aaron Ramsey and Mathieu Flamini and the Czech Republic international ran the show with his volleyed goal capping off a great display.

The Gunners won 3-2 in the end but the result was far more comfortable than the scoreline suggested with the Londoners totally dominant in the first half at the Amex Stadium. Goals from Theo Walcott and Mesut Ozil gave the Gunners a 2-0 lead but Brighton responded early in the second half. A Chris O’Grady strike was then met by Rosicky’s volley from the edge of the box. Former MK Dons striker Sam Baldock then scored but Wenger’s side did enough to hold on.

They now progress into the fifth-round and will be confident of winning the competition two years running after the results this weekend. Chelsea and Manchester City were both eliminated and that throws the competition wide open. And with the 65 year-old boss now having the ability to mix up his squad he praised the impressive Rosicky after the game – who will now want to earn more starts in the league.

He said: “He was wonderful. He’s a player we all love. If you love football, you love Rosicky.”

The praise was good for Rosicky may have come as a boost to the midfielder, as he’s played just seven times in the Premier League. However, with the Gunners still in Europe and chasing for fourth spot in the Premier League, there could be more chances for the 34-year-old to start more games in 2015.

The FA Cup draw takes place today, while the Gunners’ next game sees them host Aston Villa next Sunday in the Premier League.