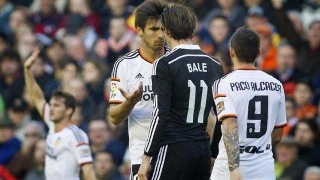 Cristiano Ronaldo had gotten the visitors on the board first in the 13th minute on a penalty kick, but Antonio Barragan evened things up in the 52nd minute and Nicolas Otamendi knocked in a header 13 minutes later for the win.

Although Carlo Ancelotti had made no innovations Real Madrid’s heretofore winning formula for the match at Mestalla, Valencia did so using three midfielders with Barragan and Piatti on the wide edges and Enzo Perez, normally a rear guard player making his debut as a striker.

The match was hard-fought with a significant number of chances for the rivals, although Valencia showed considerably greater drive, which allowed them to make their decisive comeback in the second half.

The home team’s Piatti went out with an injury and Gaya was shown a yellow card for coming onto the pitch too early, just one of seven yellow cards presented in the first half.