AFCON 2015: We Are Well Prepared To Win All Matches – Yacine Brahimi 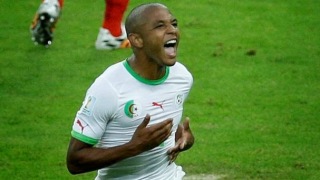 Algeria attacking midfielder Yacine Brahimi says the Desert Foxes are determined to win all of their matches at the Africa Cup of Nations.

Christian Gourcuff’s men kick off their 2015 AFCON campaign on Monday when they take on South Africa in their Group C opener at Estadio de Mongomo.

As the top-ranked team at the tournament, Algeria are one of the favourites to make a deep run in the competition, and Brahimi has made it abundantly clear that he and his teammates are fully focused on the task at hand.

He told cafonline: “We are well prepared for the African Cup. We organized good training in the Technical Center of the Algerian Football Federation in Algiers.

“The preparation was short, but that was beneficial for players to start concentrating on the competition and be in the best condition here.

“During the preparation, we played a friendly match against Tunisia and that game allowed us to fine-tune our game and correct errors.

“While in Equatorial Guinea, we just have to manage the group and especially the physical fitness so that we remain at the top,”

Looking ahead to the much anticipated clash with Bafana Bafana, he added: “We have studied very well the South African game and we will play our game and impose our rhythm.

“Our goal in this tournament is to win all our matches, starting with South Africa.”

Previous We Can Still Win The League, Ramsey Boasts
Next Algeria Sends South Africa To The Cleaners