IN NUMBERS: Messi – The Record Breaker 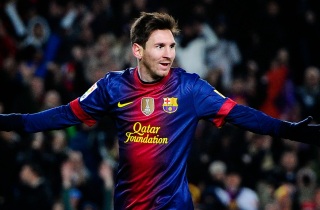 Lionel Messi had another wonderful evening in La Liga as his hat-trick helped Barcelona to record a 5-0 win over Levante.

It took Messi to within two goals of Cristiano Ronaldo in La Liga – the Real Madrid forward has 28 to Messi’s 26 – and took his tally for 2015 to a remarkable 11 goals and six assists in just seven Liga games.

31 – Hat-tricks in all competitions for a Spanish club, joint with Telmo Zarra.

106 – Assists in La Liga, beating Luis Figo’s 105 which was the previous best mark since records began.

37 – Goals in all competitions this season, while Ronaldo ‘only’ has 36.

39 – Total goals and assists in La Liga this season, while Ronaldo ‘only’ has 38.

500 – Goals and assists combined for Barcelona in all matches, including friendlies, which finished on 503 after his hat-trick.

I'm an avid and seasoned sports/ multimedia journalist. I have a biased love for Real Madrid and passionate advocate for the overall growth of the Nigeria Sports Project. I can be reached on 09077894123 or/and 'info@thesportsbay.com'

Scroll back to top